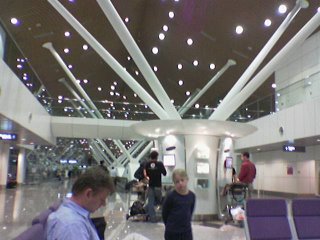 Am now waiting for the gate to open, sigh I can't understand why they can't open the gate early when there is a full complement of security staff as well as airline staff just sitting around in the louge chit-chatting and watching TV.

The little girl in the picture looks really restless, she has been pacing around and annoying the hell out of her dad (the man in the picture, who is trying to read a novel) with questions like "why can't we go in?" "why are we waiting here?" "can't you ask the staff to let us in?"

Poor girl...her dad should get her a book or something...or at least ask the girl to follow her mom around window shopping...

The sad fact about KLIA is that there is not enough activities for travellers to keep occupied, unlike Changi Airport where there is a host of activities from movies to gaming consoles. In fact I was a bit disappointed that I did not have to transit via Singapore :(