Toronto: Naked Bike Ride
No we didn't bike around naked! But a group of people bared all (except for footwear) as they cycled down the streets of downtown Toronto. Their aim is to bring awareness to pollution caused by vehicles.

We found it quite amusing, since we weren't sure whether they were a bunch of loonie-bins... until we saw that they were escorted by fully clothed policemen on bicycles. 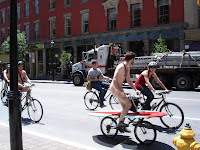