I have been thinking about Malaysian food for quite some time. So last Friday, Anand and I went to this food court in Markham that sold Malaysian food. Markham is about 30 minutes drive from Toronto if there is no traffic jam. It is a suburb that is mainly populated by people of Chinese descent.

So in this food court, there were 4 shops. One selling the usual roast duck/chicken/pork, another selling Philipino food and another selling Cantonese food. The fourth and most popular one is Gourmet Garden, selling Malaysian food. The menu is extensive! Even have bak kut teh, poh pia (weekend only), asam fish, ayam percik. Anand and I ordered Char Keow Tiao, Petai Asam Udang and Roti Canai with Chicken Curry. 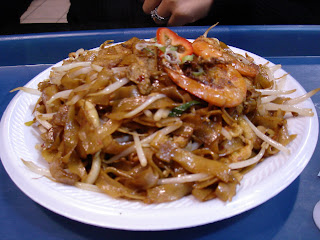 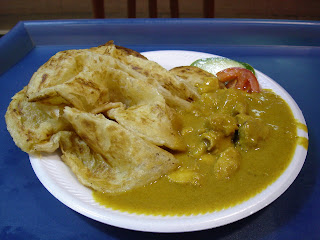 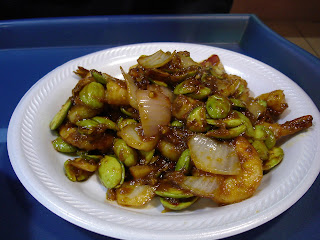 Anand had never eaten petai before. He said it tasted like paper. Only the next day did he understand why I said it is also called stinky beans. Value for money is good. Taste is good, except that the Chicken Curry was salty. My Char Keow Teow is good but not the same as home. Maybe the Keow Teow we get here is not the same. The funny thing is that we both felt heavy after dinner. Not sure if it is due to the fact that we pigged-out (large portions - the Char Keow Teow can be shared with 2 people), or is it the MSG?
So we'll go back and test again :)

Petai..hehe..it only hits you the next day. Does the koey tiow come with si ham?

Hahaha you have finally found the Malaysian Foods! It is not MSG that made you heavy but you have certainly over eaten.The foods there are always in huge portion. This must be the food court where my sister in law Aunty Linda used to pa-powing. We ate at another food court where there is a husband and wife team selling Malaysian food. Uncle James will be able to tell you the name of the stall. This couple comes from Old Klang Road