Well we spent CNY back in my home town (Kota Bharu, Kelantan) this year. What was the difference with other years? Well for one, this is the first CNY as a married couple, its also the first time since I started working that I have helped my parents to decorate the house for CNY...naughty me.

The series of photos illustrates my point. 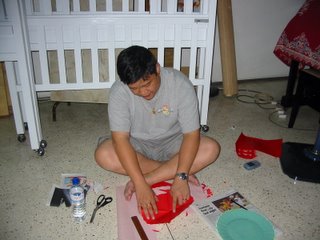 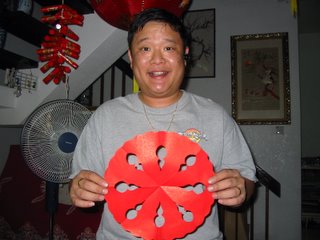 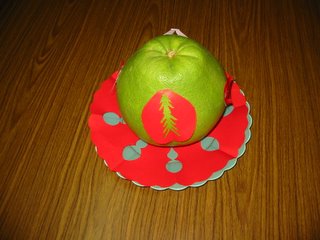 A pamelo is placed on top of the red paper. To Hainanese pamelos is an auspicious fruit as the Hainanese pronounciation of pamelo is "yiu" which sounds like the Hainanese word for "again". The significance of this is explained in the next photo. 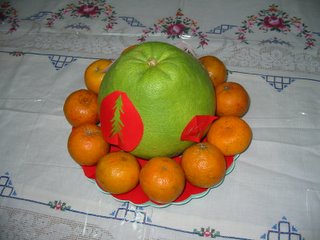 Normally kalamansi lime@limau kasturi is placed around the pamelo, however I forgot to buy the lime and therefore substituted oranges instead. Anyway, the Hainanese pronounciation of kalamansi lime is "kiat", and combined with the Hainanese word for pamelo makes "Yiu Kiat" which means "lucky again"... I hope the CNY will bring my luck, despite me substituting oranges for limes. 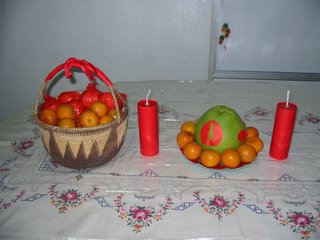 The pamelo and oranges are then placed on the table with a basket of oranges. I don't know what the mock fire crackers symbolises... my dad thought it would looks nice. The basket on the left was a gift from H.E. Emily Davies, former High Commissioner of PNG, to my parents when they hosted a dinner for her during an official trip to Kota Bharu. The basket is a traditional PNG handicraft. 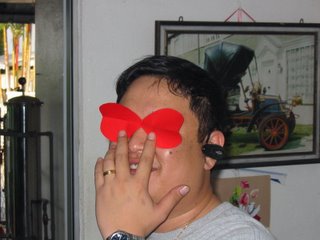